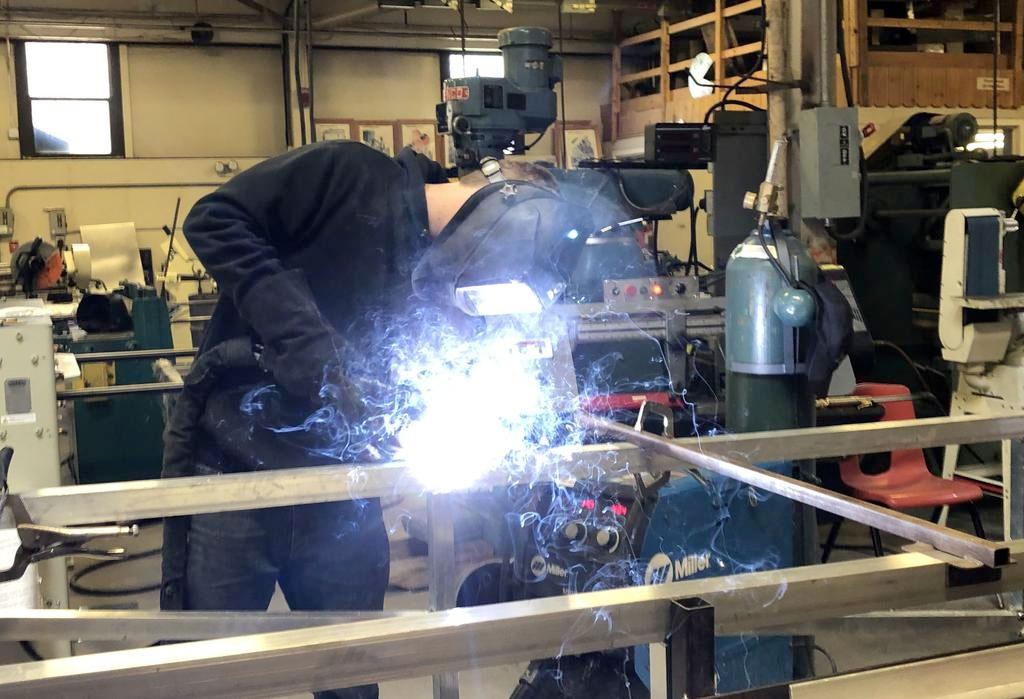 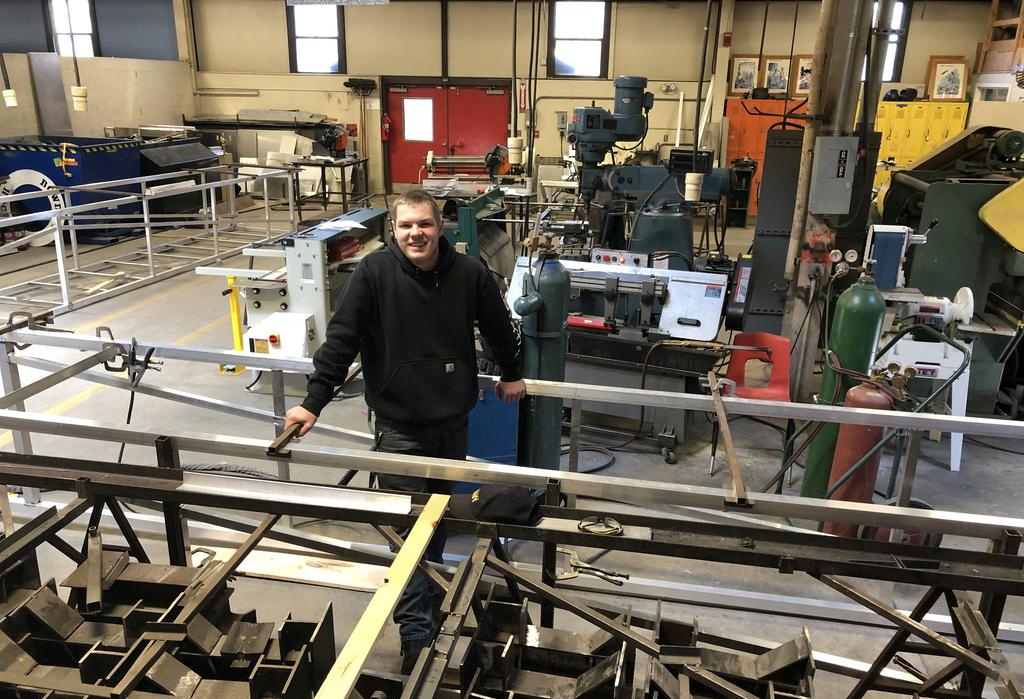 As a freshman, Swanson was inspired as he saw older Region 10 students returning to Mt. Ararat, safety glasses still on, having driven their own vehicles back to school and grabbed lunch along the way.

“It’s more of a professional setting, where you’re responsible for yourself,” he said. “… We get here on time, we do what we’ve got to do, and we go when we need to. And everybody that is here usually wants to be here. This isn’t a good dumping ground for kids, because they can’t keep up.”

Swanson started welding during his sophomore year. He’d had no experience in the craft, although his grandfather was a welder and engineer.

“This was just the coolest shop setting to me” out of all those he visited, he said.

Swanson at the time was splitting his days between the two schools. He found that shifting mental gears at Region 10 helped him tackle his academic schoolwork.

“It gave me kind of a break, to chill out and relax,” he said. “… I’d rather be working with my hands, than sitting in a classroom.”

Swanson found his eyes glued to the classroom clock, counting down the minutes. In the shop, meanwhile, there didn’t seem to be enough hours in the day.

But attending two schools at once wasn’t easy.

“Junior year was probably my hardest year, because there’s just the workload,” he recalled. “The school load, and still commuting back and forth.”

But he worked out a plan with Mt. Ararat Principal Donna Brunette. He would complete all his academic classes by the end of his first senior year semester, allowing him to spend his remaining high school months at Region 10, full time.

“All I needed was one English credit, which I take here,” Swanson said. He covers that in the afternoon, and welds in both in the morning and afternoon.

To accommodate their time at Region 10 and still allow them the necessary credits to graduate, Mt. Ararat offered Swanson and other tech ed students a different credit-earning program, dubbed “3-2-2.” By staying at Region 10 for three years, he’s only had to take two science and social studies classes each year, and three math courses.

TOPSHAM — If his freshman year was any indication, high school was destined to be an uphill battle for Parker Swanson.

“I was fighting through classes,” Swanson recalled May 9. “I passed everything, but it was a struggle. I didn’t like sitting down, staying still for that long, 80-minute periods.”

The Mt. Ararat High School student knew there was an alternative course: Region 10 Technical High School in Brunswick, which has more than 200 students from surrounding communities.

But that wasn’t the place for college-bound teens, he was informed.

“That’s what they were starting us with young; even my parents,” Swanson recalled. They balked at his desire to try sophomore year at Region 10.

“All the kids who couldn’t get through school and had behavioral issues went to ‘voc,’ and (technical schools) had that stereotype,” Swanson said.

But when the Bowdoin resident brought his parents to an open house at Region 10, their perception of technical education was turned on its head. Swanson has thrived there the past three years, stimulated by a hands-on method of learning that stands to serve him well in the years ahead.

Swanson and the rest of Mt. Ararat’s Class of 2019 will graduate at 1 p.m. Sunday, June 9, at Bowdoin College’s Watson Hockey Arena.

Certified nationwide by the American Welding Society, Swanson was fully prepared to go straight to Bath Iron Works following graduation, having worked with mentors from the shipyard.

But then came another calling: the U.S. Navy. He ships to boot camp Aug. 20, and will spend six years on active duty, and two in the reserves.

“I could go to a place like BIW and make a lot of money, with good benefits,” Swanson noted. “But 10 years down the road I’m going to be worn out, and sick of clocking in and out of the same place every day. It’s not a trade that you can stay in forever. And the training that the military can offer is 10 steps above.”

Plus it doesn’t hurt that the Navy will pay for the college courses he takes the next several years, along with funding his housing.

“I can’t see paying for college when I take a six-year vacation, and go on a trip, go see places and get to work and learn a trade,” said Swanson, who plans to learn underwater welding.

Hand in hand with the welding abilities he’s picked up the past three years have come essential life skills.

Despite his parents’ initial resistance, they are now fully on board with his choices. So much so, that Swanson’s freshman younger brother is enrolled in a pre-engineering program at Region 10.

“They’re huge supporters,” he said, noting that the enthusiasm of the students who gave tours and demonstrations during that open house three years ago swayed them immediately.

It’s contagious. Swanson’s own energy at a more recent open house inspired one visitor, an older woman, to don a coat and helmet and try her hand at the arc welder.

CONGRATULATIONS TO PARKER AND ALL OUR HIGHLY TALENTED 2019 GRADUATING CLASS! 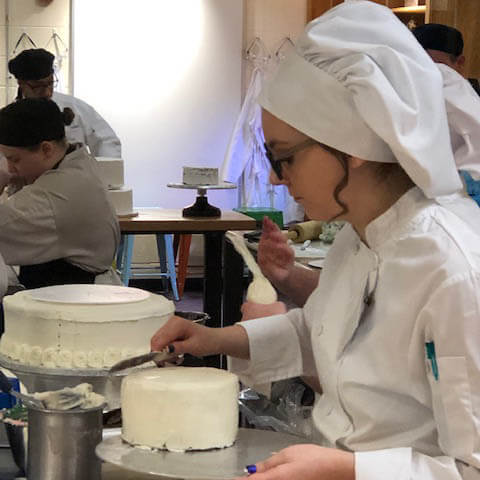 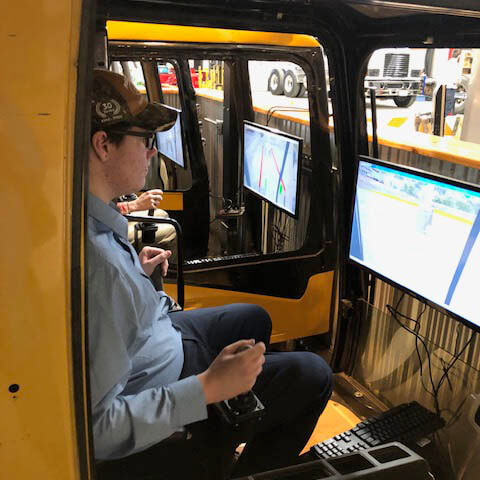 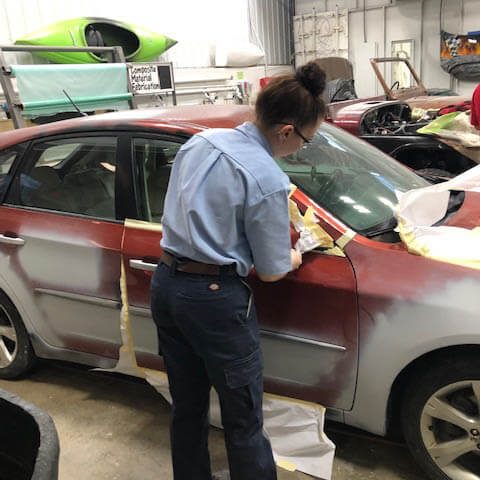 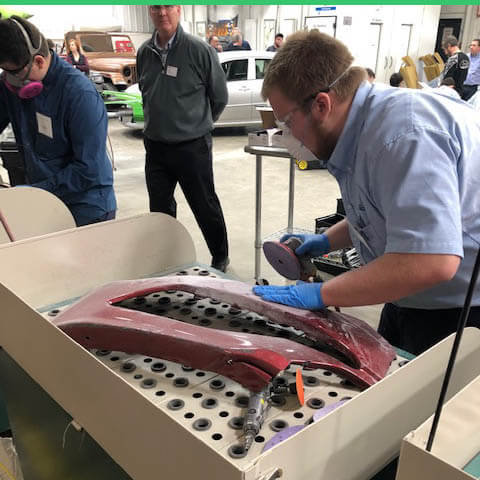 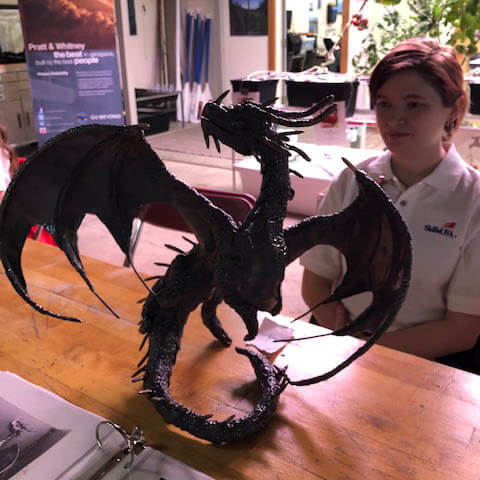 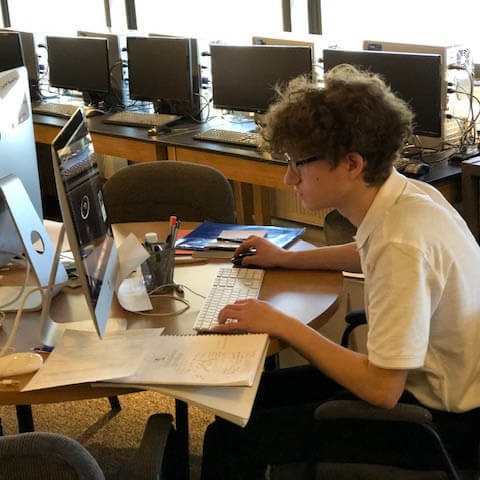 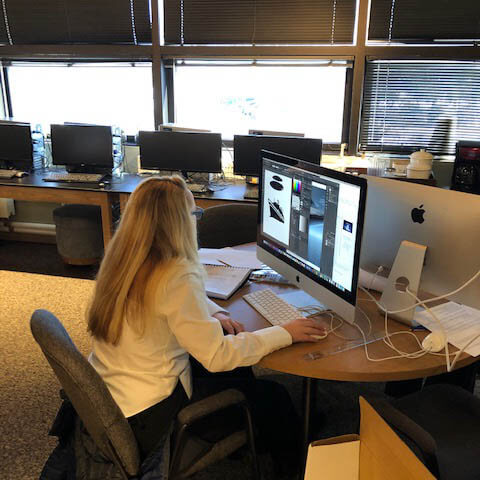 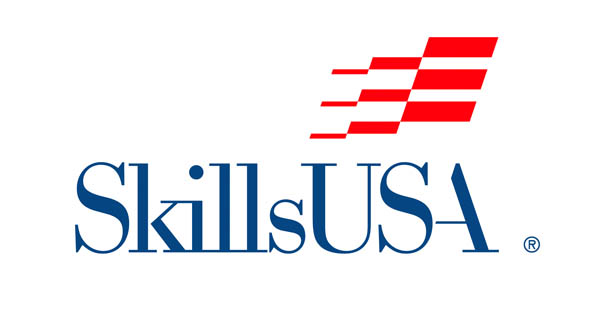 Many of our students participated in the Skills USA Competition held in Bangor at the United Technology Center. Thank you to each and everyone of you for the hard work you put in to prepare for this event!  The skill, creativity and ingenuity of all the contestants was truly amazing!  Region 10 students placed very well in this highly skilled contest. Congratulations to Dan Pratt and Jasmen Libby for their silver medals, and to Ricky Allen and Alex Namer for their bronze medals. We are so very PROUD OF YOU!  In addition to all the medals, Dan received a $2,500 scholarship and Ricky received a $3,000 scholarship!

A representative from Bath Iron Works came to our school on Wednesday, March 13, to speak with interested students about the 1200 jobs openings they anticipate in the next year. Many of Region 10’s programs provide training which are greatly in need at BIW.  BIW encouraged all students who are in their final years of school to apply. Welders, students with an understanding of technology and mechanics and even entry level graphic designers are encouraged to apply immediately. The room was packed with students at both informational sessions.  What a wonderful opportunity for our students to pursue the career they have chosen! 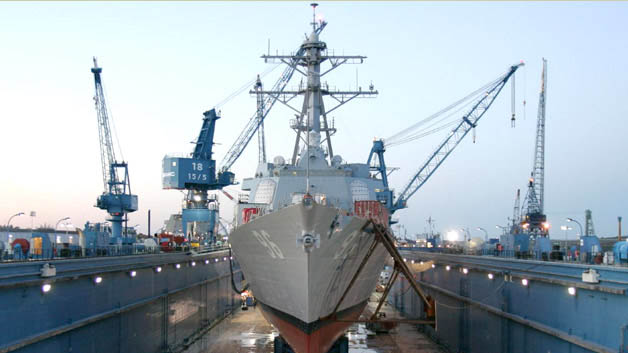 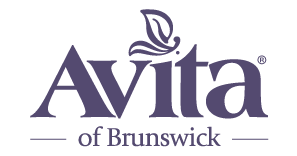 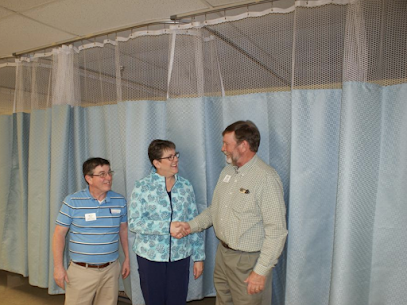 Officials from Avita of Brunswick, a local assisted living community specializing in memory care, recently presented Region 10 Technical High School’s Certified Nursing Assistance program with five brand new, state-of-the-art privacy curtains for its health occupations lab. The lab, which replicates a working hospital or assisted care unit, is designed to teach Region 10 students program basics in a clinical environment before they work with patients in real clinical settings as a part of their training. Avita is one of several area health care facilities that serve as a training site for Region 10’s CNA students. Avita’s Executive Director Gary Currier said, “We are thrilled to be able to support Region 10’s CNA program in this way. We’ve had so many excellent students work with us and for us over the years, and we wanted to contribute to the program with this donation.” Before Region 10 CNA students are ready to work with real patients, they undergo two months of classroom and lab prep in the fall, learning the Maine State Board of Nursing CNA curriculum and practicing patient care in their lab. According to Region 10’s CNA instructor, Joanne McMahon, “These new curtains help provide a sense of pride in our program and realism in the students’ studies.” THANK YOU AVITA!

Many of our students participated in the Skills USA Competition held in Bangor at the United Technology Center. Thank each and everyone of you for the hard work you put in to prepare for this event!  The skill, creativity and ingenuity of all the contestants was truly amazing!  Our own students placed very well in this highly skilled contest. Congratulations to Dan Pratt who won a silver and to Jasmen Libby for her silver medal, Ricky Allen for his bronze medal and Alex Namer for his bronze medal. We are so PROUD OF YOU!  In addition to all the medals, Dan received a $2,500 scholarship and Ricky received a $3,000 scholarship!  WELL DONE!

A representative from Bath Iron Works came to our school on Wednesday March 13 to speak with interested students about the 1200 jobs they will be opening in the area.  Some of our areas of focus are greatly in need and they encouraged all students who are in their final years of our school to apply. Welders, students with an understanding of technology and mechanics and even entry level graphic designers are encouraged to apply immediately. The room was packed with students at both informational sessions.  What a wonderful opportunity for our students to pursue the career they have chosen!

On May 10th I took the Pre-Engineering class to the L.L. Bean manufacturing facility here in Brunswick where we got to see the manufacturing process, and discussed the company’s infrastructure investments to manufacture one million boots per year, and the challenges they faced to get there.